I am, only the day I die, until then
I am just becoming a finished line, the final dot in
one of these lines, stretched beyond a memory.

Like flying from Santo Domingo to JFK on the red-eye,
feeling the conquest and the wars and the constant fear
of annexation being moved in a single airship.

Limits define the borders between countries,
districts, and the powers of state,
a tragic ending produced by interpretations,

subject to charm and presence and nuances
that are not part of any preceding condition
but the moments when air and time are shared.

Knowing the edge of the ocean precisely because it’s silent
and dark like the trail we leave behind when we beg,
a black hole collapsing on its own spine.

From ten thousand feet, it’s a void
we know exists because there is nothing to see.
Where human settlements rapidly turn

electricity and geometry into modern desire,
circuits of fictions joined by nodes,
becoming obedient and proper as we think we should.

Metamorphosis descends into the airstrip
where light bulbs and TVs flicker as if
insects were protesting the arrival of the sea.

We are being conquered from within
like children playing musical chairs,
rushing towards an outcome we already know

before they obeyed the double yellow
lines along the asphalt that lead everywhere,
except          where the birds are.

The boundaries on the map are carved and so is
the tangent connecting anatomy and beliefs, but
we only see color as the skin covering the Caribbean Sea

or the white and purple bougainvilleas cloaking the garage,
the four eyes of the black-crowned tanager avoiding
the onomatopoeic language of endemic birds.

Dolon has never been on a plane or a train,
despite all the times his mother’s tried,
all the forms filled without understanding what they meant,

the Haitian-made cologne he wore the day photographs were taken.
the gesture of the Tirolí market captured like a convicted ghost,
his hair soaked in something that must be jellyfish,

pulled back to his nape like the white kids
leaving long grooves
like railroads plummeting down his back.

All the stamps and taxes finally paid for,
birth certificates legalized and carrying
his mother’s dreams in an envelope moistened by sweat.

Money borrowed from a Protestant loan shark
at thirty percent to show on the bank statements
as confirmation of autonomy and wealth,

but boy can’t be detached from island,
and that one trail leading up to Bahoruco
is the only migration he’ll make.

Four of his five sisters said leave him, Mami,
he wouldn’t fit in anyways,
campunos are not made for New York.

She told him about M&M’s and snow,
how you can get plantains above 154th Street,
but where are the birds? Central Park is just a simulation,

gutted mountains rearranged into buildings,
ancient reptiles holding a population of hope on their backs,
wheels and guns and antennas as tall as sycamores,

controlling the traffic of interests that began as words.
Dolon danced like he was told the Taíno did,
smoking how he was taught the Taíno smoked before

stealing horses from the conquistadors
walking backwards to fake their tracks and revolt
into the forest, todos los cimarrones saben correr.

You’ll be happy here, his mother said last time they spoke,
a week before she slipped on the escalator at Macy’s.
You can be anything you want to be, but can you?

A pack of saltine crackers crushed next to her purse,
her body tangled in a black and white dress
similar to the one she wore the day she left.

Dolon flows across the thickets in the cloud forest
in all fours like an overweight black wolf
unseen by farmers and smugglers.

His first bird was the Antillean euphonia.
Precious pietersite with wings, hunting for mistletoe
as the boy pushed an old tire down the dirt roads of Duvergé.

Aren’t we all hunting? Running? His feet are mute,
as the true past of this island and the flight of owls.
His toenails plow the aluminous lateritic soil

that the Americans surveyed back in forty-seven, savannas
and grasslands all the way to Aceitillar where
the crossbills drink from the guard’s pots during every draught.

The largest aluminum reserves on the island,
bauxite and goethite hematite, too.
They combed the limestone and slopes for ore.

Dolon follows the red-tailed hawk’s soar
listens to the bullets like the shrill chwirk that
serve as all birds of prey in Hollywood films.

Another homogenization of the natural realm
like the fake violets and the heart shapes we carve
on agave laves.

The perennial quality of stupidity.
The magnetic venom in legacy.
The only suitable bane for our kind.

He knows better and reads the temperature of wind. The heat
rises from the clearings that are killing this biosphere.
The hawk glides above the visible prey over the coralline stone.

He’s seen all endemics but one. The rarest bird,
the rarest boy in an island split by thirds
lead grey and blood red, the hues that make history

and the primary feathers of the Bay-breasted cuckoo
Cúaa! a call that is both a jewel and a knife
like dangerous events in our minds.

He winces when he hears the gyre of a clean trumpet
across the lowlands, then an echo from the cliffs and then another,
further, as if it were being broadcast across the Antilles,

flooding the dry lake, covering a border as infamous as
imaginary. All the living things pledge their bodies.
The gospel of bird is preached from green tropical clouds.

His younger sister calls to tell him about Mother
but can’t reach him. She is the one who remained quiet,
who gave him her chocolate milk on Saturday mornings

and told him about the girl kidnapped and raped by soldiers who
aided smugglers across the border. How she found her way home
following an ashy-faced owl that perched on fence posts and waited

as the girl bled down her legs without shedding a tear.
Her father was the first white man to add all
endemics to his life list before what they did to her.

Erosion swept away the layers of mountain and man,
water rolling down across where geopolitical lines
are drawn in maps but not through the scattered zinc houses

of those who live where this country ends
split in two, like the man who now hates the land he loved
and becomes another cimarrón unleashing vengeance

against a pain introduced by the way history has been told,
nations, justified with symbols and quotes that argue randomness
is a privilege, sacrifice and promises are blessed by the gods.

Birds know where land begins but not these two countries,
or from where the pull of civic love in each of them comes from
nor feel anchored to where they hatched.

There is one exception that senses the tension dragged
like dead cattle across tribes, caciques, invaders,
slaves, genocide, independence and authoritarian rule.

The grey-crowned tanager stays put. What does it know that
we don’t? When was it agreed? Did mothers try to persuade them, too?
Migration is only for those who seek love, peace or food.

I have been where the cliff drops down to the jagged rocks
with the same violence and immediacy that arrived by ship,
vines crawling around the trunks and down the bluff

in search of water as Dolon goes down following songs,
Cúaa! a klaxon pushed by every empty space inside the living.
Cúaa! a hoarse tone inside the first syllable, released like guilt

after the mouth opens and runs out of air. They’ll find him
in seven days, bruised and slayed by serrated monoliths,
the fiercest grounds in this or any other Archipelago.

They’ll never know of each other’s death, his mother and him.
I’ll never know if he saw the last bird before he fell.
A rare spirit, nearly half a meter in length,

a black and white tail trailing his reptilian ancestors
almost as long as the rest of his body,
a guttural prayer that recalls the croaking of frogs

and the bleating of goats. Yellow irises surround dark spheres,
maybe less than two hundred left, always in transition between
dry and wet like we are always undecided between life and death.

I am only the day I die;
until then,
I am just becoming. 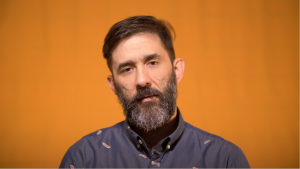